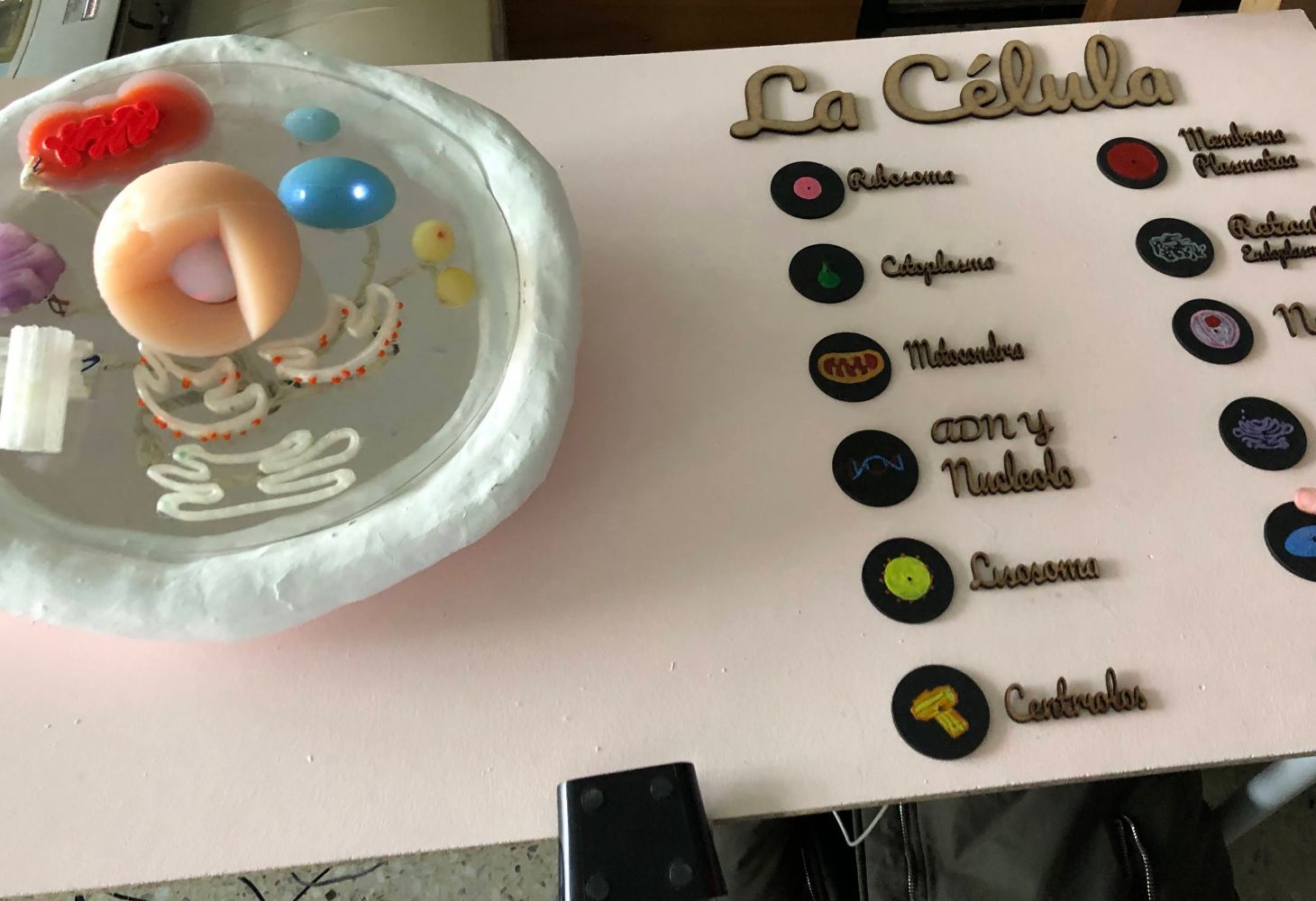 The project has been carried out by students from 2nd ESO to 4th ESO.

A cell constructed of different materials that has various functions. Among them is an intelligent function that is about pressing and, through electrostatics, activates a part of the cell, which in turn lights an LED and (emits) a (text, voice, message...) on the pressed organelle of the cell.

This does not end here, because this project also consists of a part in Virtual Reality and where all the people who want will have access to the cell in 3D, and also Augmented Reality files to fix concepts.

The main purpose of the cell is to teach in a different, more original way. We have realized that much progress needs to be made in teaching and we believe that this is a very successful step. We want our colleagues to be able to learn more easily and innovate with it. We must also consider that the work that some students do can help others is a very important part because you learn by teaching. Another objective of the cell was to merge ICTs with other disciplines such as Music, Art, and of course, Biology.

The first thing we did was divide the work. On the one hand, some of us take care of the structure or "the membrane" of the cell (built from newspaper, glue and water) while others make the 3D molds of the organelles (TinkerCad, MeshMixer and Cura). The latter are formed by filling a mold (made thanks to a 3D printer) with platinum silicone and some LEDs have been placed inside.

The leds of the different organelles are mounted in parallel and are inserted inside the silicone.

At the same time we were recording and editing the audios (Audacity) with the explanation of each organelle (available in Spanish and English).

Others were programming the TouchBoard through the Arduino IDE to associate each of the contacts with a corresponding action. Then, in a board we made an elliptical hole where we placed the cell and joined four legs to form our table.

In it are the buttons corresponding to each organelle. These are painted with conductive ink and, being connected to an organelle (by means of an arduino board), cause the previously installed LEDs to light up and play the audio with its explanation. The organelles are placed inside the cell, on a methacrylate surface that supports them.

For the user: By touching one of the buttons painted with conductive ink, the electrical energy will be transferred to the arduino board and from there the signal will be transmitted to the selected organelle, causing the LEDs inside the silicone to light up and the signal to be reproduced. audio with the explanation of it. In this way, the user will be able to listen to the information of the specific organelle (in English/Spanish).

After interacting with the cell board, the user will carry out Virtual and Augmented Reality activities that will serve to fix the concepts learned.

It brings the Maker community closer to education, demonstrating that it is possible to merge with multiple disciplines as different as Science, Art, Music, Languages, ICTs and Biology. In addition, it tries to make visible that, through projects, multiple intelligences can be worked on and that students can create projects so that others can learn through them. Students who teach peers who learn.