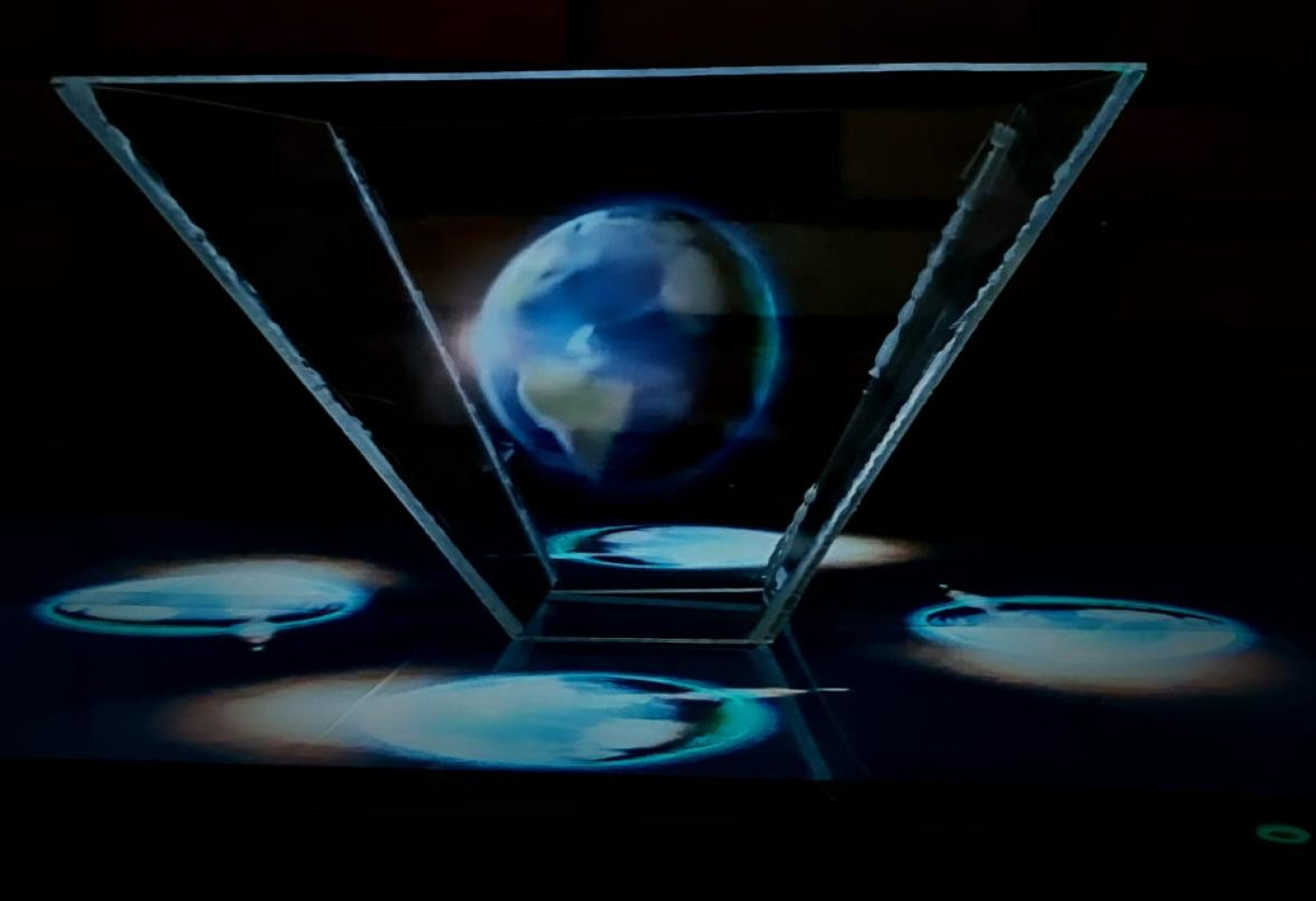 This project consists of teaching younger children all the information known about the solar system and the universe in a didactic, fun and visual way. For this, we have painted by hand and with fluorescent paints, nine panels with their respective planets and the Sun that we have placed along a corridor, which we have conditioned to give it a dark and relaxing aspect, typical of planetariums and with light. ultraviolet. At the end of that tour, a hologram of the Earth awaits them, telling curiosities about our planet that we often do not know. In addition, on the other wall of the corridor, lines have been painted to scale that reflect the diameter of the Sun with respect to the planets in order to show how big it is.

The planetarium's main purpose is to teach in a different, more original way. We have realized that much progress needs to be made in teaching and we believe that this is a very successful step. We want our colleagues to be able to learn more easily and innovate with it. We must also consider that the work that some students do can help others is a very important part because you learn by teaching. Another objective of the planetarium was to merge ICTs with other disciplines such as music, art, philosophy and science in a very visual way.

On the panels that we painted the planets on, we nailed a star painted with conductive ink. The nail was sticking out from behind, so we connected the cables, with crocodile connectors, to a touch board. In it were the different audios of each planet, and to activate them you just have to touch the star. The electricity is conducted through the ink and up the cable, until it reaches the touch board and audio is played through the connected speakers. Between Mars and Jupiter a curtain of Styrofoam balls has been placed that try to reflect the asteroid belt.

In addition, we carried out some workshops on augmented reality, virtual reality and video playback where reflection was invited on the greatness of the universe and our existence.

The Solar System, the planets, have inspired man to compose music, so next to each panel there is a QR code that will take us to an audio about the representative music of that planet.

On the other hand, we prepared an augmented reality card about the Solar System. These are colored and then, thanks to an application on the tablets, you can see the image of the Solar System in 3D. The participants must guess the name of the planets and finally they will orbit around the sun. If you click on each planet, information about it appears.

In the virtual reality activity, we placed a 360º video, in which they could see the entire solar system while listening to information about the planet that was nearby.

Finally, in the corridor, we placed a hologram in which the planet earth could be seen thanks to a prism made of methacrylate. While it was projected, an audio could be heard that spoke about the hologram, in this case, of the Earth.

This hologram is intended to raise awareness that there is no planet B and that we must take care of the one we have.

All these activities have been carried out by the students using the DIY methodology.

It provides a way of learning that is different from everyday life, with interactive and interesting activities. It provides visual and eye-catching means to capture the viewer's attention, giving a distinct view of the universe in another way. You enter a state of absolute relaxation and learn in a state of calm.

It allows the Maker community to approach and merge with multiple disciplines as different as science, art, philosophy, music, languages ​​and TICs.